The commander of the forces of associate provinces barged through the door of my tent two days before the clash of the legions. His chubby face was ashen with nothing less than volcanic fear; his fingers shook like peepal leaves in high winds. A deep guttural moan escaped his ample belly, suitably enough. “Senator,” he mumbled, “the army with whom we are set to clash on January the twenty-fifth, is packed with swordsmen of such might they can chop down an oak in a trice, and throw cannonballs faster than lightening!”

He expected me to be hit by an avalanche and freeze but it pushed my thermal profile past the boiling point instead. “Reveal your source of intelligence,” I demanded.

But I am not being fair to you, my reader. Wherefore, you think, this crusade of battalions, and who might be this commander of forces?

Well, it began with my humble phone call to the corporate centre of the conglomerate, seeking counsel on a prosaic matter. During the communion that ensued, the gentleman at the other end of the line invited us to participate in State Bank Synergy Cup 2015. It would be the first ever cricket tournament among the many arms and tributaries of the State Bank Group, a miniature World Cup before the ICC Armageddon down under. He told that eight teams from the expanded family would play four knock-out matches on 25th January with partners to be decided in a draw. The four winning teams would then proceed to the semi-finals, and the winners thereof to the final, the next day.

Now if only we could hastily assemble a team!

It was a glorious chance to get together and to show one’s competitive mettle too, except that it was going to be complicated this side of the river—we were a group of five associates ourselves. An S.O.S. brainstorming was held among the arguably brighter elements of the other cubbyholes. As we set out to spread the news among the practitioners of the bat and the ball across the sorority, we met our first steep hurdle in the coincidence of the tournament with two consecutive holidays. The vacation-starved folks, toiling six days a week, seemed intent on making use of the vacations to the hilt. So picnics were planned long in advance, train tickets booked and hotel accommodations reserved. No, sir. Thank you.

Luckily, the passion for cricket sprang forth just enough aspirants by the evening.

“But what shall we call ourselves? We are so many!” One chap wondered.

“No, we are not many. We are five!” said the wise guy with a streak of hair coiled on his balding top.

“Indeed. So what may pertain to five and be topical as well?” I returned to my cubicle with that, wondering what could be hotter than Barack Obama’s visit to our capital, alongside the tournament. And then it struck me like a lightening, The Pentagon! That’s what our team will be called, symbolising the five sister banks of the system. Many thanks to you, Mr President.

By the weekend, an energetic gang was firing on whatever cylinders the gods had gifted them with. Claims and counterclaims were put under the cumulative scanner. An ego that threatened to bloat larger than Burj Khalifa was deftly ironed out and a cheerful bloke appointed the captain. The batsmen soared our confidence even though the bowlers were inconsistent save one.

We honed ourselves further and at the last stocktaking we had at least six batsmen who were sound on technique and could hit hard when needed, and out of which a troika could go hammer and tongs with the willow. A vibrant group was promptly instituted in the social media and flooded with inspiring quotes 24X7. There was the unsworn oath of playing at least in the semi-final and nothing was going to stop us short of that.

Then, out of nowhere, a shadow crossed our sunlit nursery and something snapped deep within. In a bid to grope the grit of the rival troop, the captain and his confidante sent feelers to the partners of our first fixture, or the ‘Partner for Life’ as they were called. Our adversaries reacted well, as any shrewd team would do, by sowing a harvest of fear in the weaker minds, and despite my manifold arguments and assurances, I failed to contain the contagion after that. We had planned a strategic sessions on the eve of the D-day but were faced with a truncated attendance, towards the end of which the Warrior-in-chief sat squatting in dust with his cohort, sulking at the self-prophesied rout awaiting us the next morning. The pathetic sight was a great moment to remember none less than John Milton: “The mind is its own place, and in itself can make a heaven of hell, a hell of heaven.”

Even as the match began the next day, it was clear the captain and his immediate group had lost their mojo, or perhaps their masks, without which they were less than ordinary blokes. And yet, choosing first to field, we had a marvellous session by restricting the rivals to an average total, thanks to the positive streak of our lead bowler and his companions, aided by the mostly flawless and agile fielding. Then the batting began and the batting order was unduly pulverised by the jittery group. It lead to a hopeless run out, followed by an unexplained rot of the early batters on the pitch. A lone foot soldier went in and dug his heels, flashing his bat from time to time and keeping our hopes alive, but the rest kept perishing to ordinary assault. We hadn’t truly lost the game till our imposing captain descended on the pitch, listless and lead-footed, converting doubles and even three runs into singles, and displaying a series of spectacularly defensive, runless taps, save one stroke. As it happened, The Pentagon was defeated by just one run.

“Who mucked up the batting order?”

“Did he think he was playing a test match?”

“He refused to run for at least ten runs that were there for taking!”

“How could it have happened?”

“We have surrendered a conquered match.” 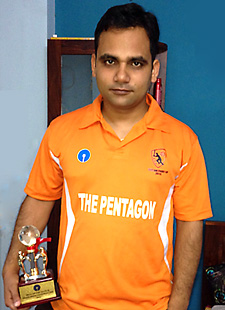 The mood in our camp was bitter; few had the heart to stay back after that. But as I was trying to slink away from the stadium, I was stopped by a couple of kind gentlemen. “There cannot be two results of a match —someone had to win. Rest assured, you guys played really well —and that is what it is all about. Do come tomorrow too.”

It seems we had managed to win a few hearts, after all. Other than that, the lone crusader from our side who made nearly half the runs of our total score, won the Man of the Match title, despite our loss: Hallowed be thy name, Himanshu Verma!

(State Bank Synergy Cup 2015 was a grand sporting confluence of the officials from the various arms and satellites of State Bank Group, organised with a view to augment synergy across the system. The cricket tournament was held among eight teams and progressed through seven knockout matches organised over 25th and 26th of January 2015. The participating teams consisted of Globalions, Black Hawks, The Pentagon, Double Troublers, Partner for Life, Super Sixes, SSL Bulls and SBI SG. Globalions won the trophy.

The members of the Pentagon team shall remain grateful to the organisers Mr Vinay Tonse, Mr Tula Srinivas, Mr Vijay Sabnani and Mr Alex for making them a part of the magnificent event.)