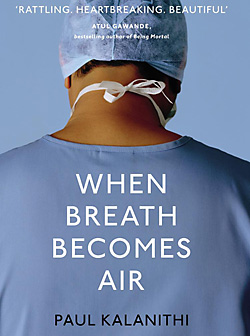 Somewhere in the pages of his unforgettable autobiography, Paul Kalanithi alludes to the concept of areté, the ability achieved through a confluence of human faculties at their peak, to describe neurosurgery’s unforgiving call to perfection. Neurosurgery, where a scalpel’s journey a millimetre up or down, or to the right or left, in the labyrinths of the brain can be the difference between delivering a human as we know and a ‘twilight existence of unconscious metabolism’. Much before we come across his actual use of the Greek word, we will be compelled by Kalanithi’s unwavering strokes of perfection, word after word, sentence after sentence, ripple after ripple, in accounts where not even a syllable can be replaced for a better one.

So overpowering is the brief life of the departed litterateur and neurosurgeon, so musical and probing his strains, so chastening his conclusions, that Abraham Verghese, who like us, would know Paul only after he ceased to be, wonders in his foreword to the book whether Paul Kalanithi was Thomas Browne redux, or in a flipped perspective of time, Thomas Browne was Paul Kalanithi redux. “Listen to Paul. In the silences between his words, listen to what you have to say back. Therein lies his message.” It is a message that is going to pulverize how you look at life and death for ever. And as the dice of time rolls by, if one of us were to end in the cul-de-sac where Kalanithi found himself one day, let not the vortex of misery overcome the candle in the wind.

The dreaded diagnosis strikes at the onset of the book but we learn Kalanithi and his wife had been suspecting it for a while. He had been braving bouts of unforgiving back pain and had been losing weight all along. At times he would wake at nights with his sheets dripping wet with sweat. The symptoms had been adding up to a textbook case of cancer; he had been secretly googling the incidence of the disease among non-smokers of his age. Nevertheless, its timing couldn’t have been more callous or cruel.

“At age thirty-six, I had reached the mountaintop; I could see the Promised Land, from Gilead to Jericho to the Mediterranean Sea. I could see a nice catamaran on that sea that Lucy, our hypothetical children, and I would take out on weekends.”

Like a pendulum that has swung to the last point in the arc, his fate takes a sharp turn backwards when he finds himself in his hospital not in his neurosurgeon’s scrub but in a blue hospital gown and a plastic bracelet on his arm that all patients wear. He is checked in the same room where he had seen hundreds of patients over the years, explained terminal diagnoses and complex operations, congratulated patients on being cured of a disease and pronounced deaths of some others. Then he is asked to wait for the doctor by a young nurse.

“And with that, the future I had imagined, the one just about to be realized, the culmination of decades of striving, evaporated.”

Roles in the game are reversed as the hunter of maladies becomes the hunted by the malady.

Like a deft craftsman, Kalanithi flips the sand in the hourglass when the moments become ponderous and we are allowed a glimpse of his childhood in rural Arizona, at “his house, just beyond the city limits, at the base of Cerbat Mountains, amid red-rock desert speckled with mesquite, tumbleweeds and paddle-shaped cacti…. Dust devils swirled up from nothing, blurring your vision, then disappeared. Spaces stretched on, then fell away into distance.” We meet his doughty mother, who had fled across the world to meet the love of her life, but was terrified of snakes of the desert. Deeply worried that the impoverished school system would make her children dumb, she initiated them in literature and poetry. She made Kalanithi read 1984 when he was ten years old. “I was scandalised by the sex, but it also instilled in me a deep love of, and care for, language.” A galaxy of books and authors would follow, “some left more of a mark than others. Brave New World founded my nascent moral philosophy and became the subject of my college submission essay, in which I argued that happiness was not the point in life.”

Other than perhaps writing a book, Kalanithi had a vague notion of the journey he would embark upon in life. He completed a master’s degree in English Literature in pursuit of meaning, life and death, wrote a PhD thesis on the work of Walt Whitman, only to realize his scientific leanings didn’t quite fit in an English Department. He went to Yale medical school, and would go on to choose neurosurgery as his speciality, awed by an incident where a paediatric neurosurgeon sits with the parents of a child with a large brain tumour and counsels them softly. “And as I sat there, I realized that the questions intersecting life, death and meaning, questions that all people face at some point, usually arise in a medical context.”

When Breath Becomes Air is not so much a treatise as a poetry on the inextricability of life and death. And it is not so much an elegy on life’s transience as an epic on courage and fortitude. There is a dewy clarity to its reflections, and a lyrical quality to its prose, that could have emanated only from a seer of literature who, unlike others of his elk, didn’t turn away from science like “apes from fire” and graduated in medicine cum laude, and became a practitioner of the most exacting of the branches of medical science. Its pages are luminous with statements that will leave the fellow mortals gaping and breathless. I feel helpless in stopping myself from quoting but a few from his milky way:

“Putting lifestyle first is how you find a job —not a calling.”

“Humans are organisms, subject to physical laws, including, alas, the one that says entropy always increases.”

“It occurred to me my relationship with statistics changed as soon as I became one.”

“Most ambitions are either achieved or abandoned; either way, they belong to the past. The future, instead of the ladder towards the goals of life, flattens out into a perpetual present.”

Kalanithi’s penchant for quoting the most apposite words from the vast timeline of literature is phenomenal. I suspect the full impact of the extract from “Whispers of Immortality” by T. S. Eliot at the beginning of the book might be lost upon the first time reader until he comes to the confession where Kalanithi is speaking about being a neurosurgeon: “I had started in this career, in part, to pursue death: to grasp it, uncloak it, and see it eye-to-eye, unblinking.” Who other than him, with his unfailing touch of Midas, could have found a title for his book, from a rather obscure poem, which dwells on his message from end to end.

Kalanithi’s book wouldn’t be complete without the epilogue by his wife, Lucy Kalanithi. It is a closure of sorts for both herself and the readers, where she reaffirms the inevitable co-existence of life and death. She sets the tone early in her message, which is also a note of farewell: “As winter turned to spring, the saucer magnolias in our neighbourhood bloomed large and pink, but Paul’s health was declining rapidly.” The juxtaposition of flourishing and withering brings the interdependence of these attributes of life in acute focus. Lucy will have much more to say and I am sure much of it will haunt the reader. I would like to close with her broodings towards the end of her tribute to Paul: “The earth is quickly turned over by worms, the processes of nature marching on, reminding me of what Paul saw and what I now carry deep in my bones too: the inextricability of life and death, and the ability to cope, to find meaning despite this, because of this. What happened to Paul was tragic, but he was not a tragedy.”

When Breath Becomes Air is dedicated to Cady, and I will leave it to the reader to find out why she came about to be.