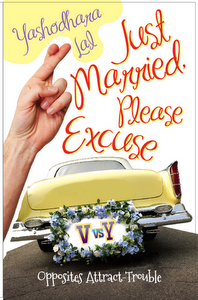 There go the wedding bells for a cute IIM alumnus, oven-fresh from classes, peddling soaps and detergents for an MNC! Déjà vu? Let’s find out.

We enter the story through a scene where the thirty years old beau of a twenty three years old management trainee who is not sure whether she is the ‘marrying type’, proposes marriage to her. The trouble is, the most beckoning years of carefree youth, the golden twenties, lie ahead of the girl, waiting to be lived. And to top it, the courtship with the gangly man is barely three months old!

It turns out that Vijay, the boyfriend, is from a traditional Brahmin family, strikingly different from Yahodhara’s, the narrator. Where Vijay’s folks are God-fearing vegetarians meld in orthodox middleclass ways, non-vegetarian food is staple fare at Yashodhra’s family. Her mother visits clubs and can down the odd beer too. But Vijay seems to have grown out of the shackles of traditions. At least, he refuses to be caged for life into a marriage arranged by his parents. It turns out that he is determined to have his say in the final round of a series of attempts at romances routinely torpedoed by his family.

We get glimpses of their first date together when they go watching ducks and fishing, their bickering and patch ups and their eventual marriage followed by honeymoon in ‘Goooaaaa’. We move ahead in life with the married couple who hunt interminably for non-sweating blue sofas, nearly turn into farmers, cope with driving lessons, move to a different city and invent social life for themselves. And all this while their contrasting personalities and appendages ignite enough sparks of merriment in a story already rippling with humour. Thus, it is only when they sit together in their wedding hall that Yashodhara realizes how ‘freakishly short upper body’ Vijay has! No wonder the poor photographer has a horrible time having their faces aligned conventionally, ‘Madam, can you more down, Sir, can you more up?’

‘Up yours, sir!’ mutters our heroine under her breath.

Then she gets pregnant and there is the familiar despair on her part for the loss of an unlived life of freedom and adventure. Nevertheless, they go ahead and have the baby and call her Peanut. The baby brings about many changes and challenges in their lives and their all too familiar conviviality starts frittering away. It blows into a ‘volcanic’ albeit hilarious climax where a young, fuming and flummoxed Yahodhara is warned of an impending disaster by a scampering man, ‘Run, Aunty! TSUNAMEEEE!’

However, the book is not without its sober moments. It is true, after all, that life is not a bed of roses, nor does it proceed forever with the easy jocularity of a comic strip. The many traps and pitfalls get illumined by the couple’s move to Mumbai, travails of nursing the baby, shifting of Vijay’s attention to Peanut, and going along with a live-in maid. Another significant strain is Yashodhara’s fight to be accepted as her true self, a non-vegetarian, non-saree-clad, guitar strumming and drum beating woman who likes to have her occasional drink.

The initial skepticism with the novel caused by a familiar sounding start wears off quickly as we are faced with a delightful tone, liberally spiced up with Hinglish and Hindi. That, the narrator has an uncanny eye for the comic in life as it abounds, both ordinary and extraordinary, is unmistakable.  Right from the moment when ‘pop goes the question’ to the very end of the story, she uncovers the rolling miles of domesticity in the same vein. She doesn’t flinch in highlighting the hilarious even in absurd and alarming situations. And to her credit, she sounds decidedly natural rather than contrived.  The pure, sterling humour of the book is reminiscent of installments of Flintstones, devoid of ironies, hidden meanings and subliminal messages. Don’t be surprised if you identify with some, if not many, of the emotions that swirl in those anecdotes.

The twin characters of the young couple pop out of the pages to quickly grow upon the reader. The author has tastefully sketched the minor characters too, notably that of Kajal, the old housemaid. And those looking for a serene message in the book would surely nod at what Vijay’s mother has to offer:

In the end, Just married, Please Excuse turns out to be an uncomplicated and rollicking account of coming together of a couple hailing from disparate segments of the society. It is destined to put a stubborn smile on your face with its innate humour and disarming frankness.

(The review is part of IndiBlogger / HarperCollins Book Review initiative. To know more about Yashodhara Lal, do visit her blog.)