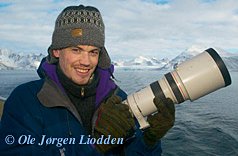 Not many moons ago, Ole Jørgen Liodden was an ace Canon photographer. Armed with his ‘tank’, a.k.a the EOS-1Ds Mark III, he scoured the Arctic permafrost for sparring polar bears. Quest for frolicking king penguins had him lying on his belly on icy South Georgia seashores. Lodged knee-deep in unforgiving snow, he stretched the autofocus limits of many a Canon, shooting sea gulls, hawk owls and hunting eagles. He returned again and again with stunning images of wildlife that stunned the folks and the professionals alike.

Suddenly though, the old companionship crumbled like a sheet of ice into bottomless pits. OJL sold his ‘tank’, 5D Mark II, recently acquired 7D along with the assortment ‘L’ lenses, in favour of the duo of Nikon D3S and D3X, paired with gold-rimmed Nikkors. The latter was admittedly a ‘gift’ from ‘the Dark Side’. But the Nikon apparatus overwhelmed him by its extremely fast and precise autofocus and superior picture quality that he could achieve in a single day. The decision to adopt Nikon for his future photographic journey was easy to take.

The community is choked with contrasting emotions of the two camps. For those on Canon’s side, the treachery couldn’t have been blacker and the venom spouted is suitably worded. The former Canon ambassador became a Nikon whore overnight. There are, of course, insinuations of a banal deal. Canon was incensed enough to expunge all references to the fallen photographer from its Canon Professional Network pages.

For those of Nikon it was a natural thing to do. The good photographer needed to equip himself with a superior imaging system like D3S/X to realise his full potentials.

Regardless of what OJL has to offer, the net is rife with speculation about his extreme step. He was apparently miffed by being bypassed for the field tests of Canon 1D Mark IV. Eventually he would receive a beta body for a brief period with a sealed memory card chamber, with no permissions to download the images or the video for viewing in full, leaving him unsure of the final picture quality. Canon appears to have become touchy about their products getting negative publicity while still in throes of birth, more so after the 1Ds Mark III faltered in the autofocus department. However, Canon’s strategy seems questionable since the early products are put in the hands of no mean photographers. As the high-caliber reviewers stumble upon the glitches instinctively, it would be ideal not to have them handcuffed for the welfare of all, and that includes the end-users.

OJL’s switch to Nikon should also be viewed in the light of his conviction that a photographer should never be fettered to equipment and technology. Prior to the switch and before Canon erased all signs of him from their CPN websites, there were hints of a photographer larger than the brand itself, on the page titled, ‘What’s in your kitbag?: Ole Jørgen Liodden’:

“To only think about equipment and technology is not the right track to go down….If you want to build up a name for yourself, you have to take pictures that you want, not like other photographers or how your customers want you to take them. Take your pictures from your inner visions, with your own angles and your own touch.”