“The dead could only speak through the mouths of those left behind, and through the signs they left scattered behind them.” 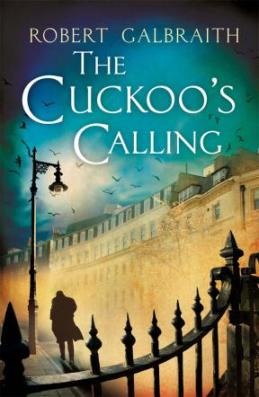 ‘J. K. Rowling writing as Robert Galbraith’, proclaims a round, black sticker on the volume of The Cuckoo’s Calling, and indeed, that is the reason I have read this crime fiction, seeped in the atmosphere of London. I am loath to take refuge behind paucity of time and money for ignoring débutante writers, God knows I have read many, but the sad truth is that it is so, more so in the case of crime fiction, whose basic premise is to uphold natural justice by bringing about the downfall of the delinquent. And I am sick of both prevalence of crime and absence of justice.

Also, I seem to be too besotted by the denizen of 221B Baker Street for my own good. The laser sharp detective seems to have ruined all my future encounters with those of his trade.

Looking back to the series of adventures featuring Sherlock Holmes, I realize how deep an understanding of the human mind, of common emotions like love, hate, anger, jealousy, greed and revenge, that inimitable, redoubtable detective had, not to speak of his scorching, scientific mind. Little was known, however, of his own personal life, except for the scrapes managed by rather ordinary but lovable Dr Watson.

Here we have then, by contrast, a detective who has had a very disturbed childhood, a tarnished love life and a leg partly blown away in Afghanistan. His emotional, physical and financial mess call for detailed volumes in their own right and naturally, a substantial part of the story is dedicated to the agonies of this gent, Coromoran Strike, and that is what he is called.  Discarded son of a rock-star, his entire worldly possessions consist of four boxes of trash outside the landing of his office whose rents have remained unpaid for a serious length of time. He receives death threats every Monday, sleeps in a camp bed in his office, eats Pot Noodle and washes himself surreptitiously in ULU washrooms.  Needless to say, it adds layers of richness and colours to the book, and thus it is often that the detective himself is the focus of the narrative rather than the main story which doesn’t seem to pick up pace till rather late in the book.

It all begins one chilly London night when the monotony of snow covered road is shattered by Lula Landry, a feted model, who plunges to her death from her third floor penthouse apartment. The biracial, sculpted beauty, who was a ‘delicate shade of Café au lait’, had been modelling full time since seventeen. She had been a raging success, earning a fortune for herself in a short time. A drug lord turned a rapper had made her part of his songs. However, there was a price to pay for her extreme popularity. She was constantly tailed by the paparazzi and her mobile phones were hacked often, leaving her feeling permanently hounded.

Hailing from questionable quarters, Lula was adopted by the white, uber class Bistrows who had just lost one of their sons in a horrible accident. Her new mother Lady Yvette was insanely possessive of her but she was spurned by some in the family. Frantically searching for her roots later in her life, Lula had managed to unearth her biological mother much to the disgrace of the adoptive family. Could that have led to her untimely demise?

The investigation proceeds in the old, classic style and the suspects are interrogated one by one, some voluntarily and some not so willingly. “By nature methodical and thorough, Strike had been trained to investigate to a high and rigorous standard. First, allow the witness to tell their story in their own way: the untrammelled flow often revealed details, apparent inconsequentialities that would later prove invaluable nuggets of evidence. Once the first gush of impression and recollection had been harvested, then it was time to solicit and arrange facts rigorously and precisely: people, places, property…” Then there is the power of Google that his energetic assistant Robin uses to telling effect.

J. K. Rowling’ mastery of creating eccentric but believable characters is at full display here. The cast come from varied strata of the society, the seedy biological mother of Lula, the poor black friend from rehab, the fashion designer friend with diamond-studded ears, her off-and-on lover Evan Duffield, the high society of the Bristows, May and Bestiguis and the distraught brother John who just can’t believe that Lula could have killed herself, as concluded by the inquest –there is always the obtuse Police. To be sure, a hooded, tall black man, appears and disappears in and out of the street CCTV camera before and after Lula tumbled to death.

Rowling puts the reader unmistakably in the present day London with its mixture of the old and the modern, the ornate Victorian facades of the buildings and the gleaming glass architecture, the bustling streets, parks, gardens, cafeteria, dance clubs and the quieter elegance of the affluent sections. She takes us to the less prosperous districts of the city without batting an eyelid and the reader is none the poorer. The events unfold alongside London at a leisurely pace and the characters pop to life slowly but surely. Yes, it doesn’t scorch the street as it moves ahead or around but the narrative doesn’t lose its grip. And although it’s not too hard to sniff the killer, the denouement is fairly fulfilling, even if convoluted in a maze of alibis.

J. K. Rowling has promised to return to Denmark Street, the abode of her new hero, and I understand sequels are already in works. Obviously, the cuckoo’s calling with more of that but whether you’d want to listen more may depend on how you like the rugged, limping war veteran in his first outing. To the question whether I’d have detected J K Rowling’s imprint in this book were I to not know of her authorship, I have to say ‘No’ to the writer of the Harry Potter series, but ‘Yes’ to the writer of The Casual Vacancy. Her invocation of the drug-abusing squatters and low-lifers and their dialect is a tell-tale mark. Cormoran Strike’s childhood is faintly reminiscent of Krystal Weedon too, the girl in her previous book. And it may sound factious but the titles of the two books contain three words each with common first letters of the first two words!