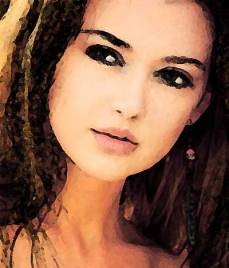 As I lie here on the dewan pushed against the window, gazing absently into the impossibly yellow canopy of the Amaltas tree, my thoughts race back once more to the field of mustard I visited on a mellow winter afternoon, many years ago. At the time, the cocoon of boyhood had withered and fallen off all around me, and I had taken a fancy to writing poetry to facilitate my transition into greatness. Fairies, charmed toadstools and talking foxes were suddenly no better than discarded bottle tops. The adults appeared to have an entirely different purport of life than thought previously. Firm in my illusion that I had the consciousness of a poet, I would sneak into a passenger train on Sundays and disembark randomly at some rural station. Sadly, I could never really concentrate on writing poetry for the fear of missing the train back into the city by evening.

I remember the air was nippy as I trudged along the earthen bund of a large field of mustard. The entire crop was rippling in unison like a bright yellow waterbody. Just as I was about to settle into a meditative posture and begin scribbling, I noticed a bestubbled man suspended on his elbows among the plants. He was wearing a pale blue vest on his partly visible torso, the rest of his body being lost in the tangle of greenery. He was clearly aghast to see me, and glowered at me the first few moments. Then he flailed a fist towards me and hissed through clinched teeth. “Sheesh! Bugger off!”

As he raised himself higher from the ground, I noticed he was not alone. There was the face of a young woman too looking at me with popped-out eyes from right under the heft of the man. Her dishevelled hair was spread on the ground and from what I could make out of her bust there was not even a wisp of thread on her body. Her left breast was squeezed under the massive brown palm of her tormentor but I could see the very round dome of her other breast, it’s almond coloured areola and the pointed nipple.

The woman somehow freed a bangled hand from somewhere and yelled at me, waving me away frantically, “Go away, you mongrel!”

Clearly, I had intruded upon something very private. Staying there another moment could have meant deep trouble for me. I repaired to the tiny railway station in record time but as I sat waiting for the train, I could feel a wedge taking shape in my loins. It was a weird sensation, as if blood had drained from my limbs and poured into the bottom of my belly, and was aching for a release. When the train chugged in tooting shrilly, I walked inside in a trance and sat awkwardly on the bench seat. The vortex that had gripped me ebbed out lazily as the trees and lone cottages began whipping past, but the slur I was greeted with seemed to have seeped under the skin like an invisible tattoo. For years after that, every time I would think of the rendezvous I had witnessed in the field of yellow flowers, my manhood resembled a grenade with a loose pin. Except now.

Since the injuries I suffered in a mishap have healed up nicely and I am no more bedridden and am ready to resume a semblance of life, allow me to lead you through the chain of events that led to the dying of my man thing.

Kanika joined the branch of Goldkeys Unlimited at Bandra shortly after I took charge in April last year when the manager posted there bungled up the accounts by disbursing gold loans to non-existent borrowers and siphoned away serious money. He would close the fake loan accounts and bring back the missing money briefly just before the monthly inspections but the balloon kept getting blown a bit larger each time. By the time it was March and the books had to be reconciled for the annual financial closing, he had lost control of the bloat and one evening instead of walking onto the platform he walked into the local train that would haul him home when he lived.

A police enquiry was in progress, and every now and then the investigating officer would appear to record a statement or haggle with the branch officials. I and Kanika were spared the brunt of the many-pronged attack as both of us had joined after the incidents. This status of being non-suspects had grown a bond between us, more so as we were entrusted with preparing confidential reports and had to often pore over reams of printouts together, although I would call that feeble.

Kanika had the brownish tan complexion referred to as ‘wheatish’ in the local parlance. She had thick black hair that had a silken feel —I can tell that because her tresses had brushed against the sides of my face when she would lean over from behind to point out some discrepancy in the figures, and I doubt if any of it was intentional. She was quite at ease dealing with the males in the office, and I had noticed her interacting with some of them in a friendly manner. She had a pretty face, the kind that make men look a tad longer than needed. The thing that hit you about her face was the lips, full with a cupid’s bow that had a chiselled feel about it. She could get unduly engrossed in the drab routines of work, which was always in plenty, but her smiles were real, and I found myself looking away when she did that because I didn’t want to get haunted by her looks. Now I will not say I was having a secret crush on her —my job was cut out as a leader— but she was cute enough to be savoured in your thoughts once in a while before sleep wallowed up the fried-up brains.

Business had sagged in recent months, and I was supposed to quadruple it miraculously by the year end. I was also saddled with scrutinising the transactions of previous five years and send weekly confirmations in complicated tabular reports.  Since jobs were hard to come by in retail financing sector and I badly needed the one I was in to keep my body and ghost together, I was slogging away till I was ready to fall, burning away like a wick in the very process of living. I was being paid a handsome overtime allowance, but I was squandering away the precious window of time that could have connected me to the material world around me, and as it turned out, to the truth of life.

We rarely spoke of personal matters, except the time I was feeling relaxed having dispatched a rather large consignment of reports to the head office. Kanika told me she was married to someone who was away in a vague place somewhere down south. Her parents lived in a suburb of Delhi where her father had retired as a teacher. She had a daughter aged three who went to a creche when she was not in school. She hated the ‘soul-scrapping’ job of gold financing. A huge lot of people coming for the loans were under rough weather. Often the jewelleries they wanted to pledge were entitled to far less loans than they believed. Then there were the inevitable calls to be made to the defaulting loanees. The worst part of it all was auctioning the pledged gold. That was not even mentioning the mounds of paperwork it generated, all of which was to be checked and doublechecked. Kanika said she reverized sometimes and she was a teacher in her dreams in a misty valley of flowers.

But she was also the most productive person I had in the office. Her understanding of problems at hand was quick, disposal of tasks efficient, and dealing with customers top notch. Compared to her, others were just rocks having varying degrees of consciousness. Maybe it was the case that she was exceptionally gifted, or maybe I was simply fated to have a battery of dim-witted morons, other than her. What else could you expect from a gold finance company whose wage structure began at the gutter top and moved downwards? She had been with the company for a few years at its Dadar branch before being transferred to Bandra to lend me a helping hand after the scam.

The previous manager, bless his soul, had a fertile if crooked imagination and he had run the show for over three years. He had left behind a rich mire of misdeeds, and the moment we thought we had nailed it all finally, something else tumbled out of the closet. The upside of these discoveries was we would get excited like kids playing hide and seek. With each new trail we would get busy with the lockers, file cabinets and documents, ignoring we were standing too close to each other at times, leaning into one another side by side, or the curves of our backs remaining in touch longer than needed.

Several months passed and the customers came and went, the auditors came and went and the police came and went, and the rains came and went but there was something that came and simply refused to go. It was the news that our finance company was going to be sold by its promoters to Sterling Fincom, a larger firm specialising in real estate and automobile finance. There were strong indications it could happen by the year end, and here we were, already in October, barely three months from the end line. There were no guarantees that all of us, or any of us, would be retained after the transition. Going by the taint that our branch was carrying like a scarlet letter on its facia, I wondered if our past experience of peddling petty loans will be worth its stain on the curriculum vitae. In short, our days together were numbered.