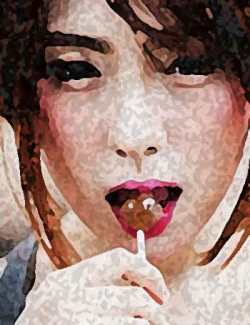 Such divinations were planted in my ears
by my aunt who died on a cloudy day,
spelling out the mantra for absolute cheers
by watching out the omens sent my way.

Cruising for success never comes by
stepping on the broom as you step forth,
setting your eyes on a lone magpie,
stumbling upon the wooden threshold,
feline of any hue crossing your path—
the blacker the cat the deadlier the hail—
or the report of a sneezing stout or frail,
or a lizard tumbling on your right toenail.

Return and wait for a while if you bump
into a one-eyed biped, or a hasty woman
darting like a bee with empty pitchers
and sucking your fortunes to make them richer.
But the grimmest of fates, the most macabre,
is a white-clad widow, a faceless relict,
remember lad, she is an outright robber,
retreat and return if she stalks the street.

But the kindest maid at the end of the lane
sold lollipops to children who so wished,
she dressed in black for her mate was slain,
—a chink in the omen my aunt had hissed.
I sought her the most on the days of the tests
that plagued poor us at quarterly rests,
there was the time when she was down with flu
and I landed straight into the hornet’s nest.
I hid the report from my father’s wrath,
It was also the time my aunt played host
to cancer and fumbled in her parting days,
craving lollipops as she gave up the ghost.