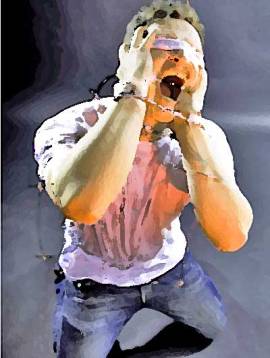 As usual, my first line of defence is denial —a weapon bequeathed to me by my long-forgotten ancestor who was one of the first to have gone biped. Truth be told, in his protracted supine state, he refused to acknowledge all kinds of approaching dangers, clear and present, till he was at an eyeball-to-eyeball distance of a flash flood or a ferocious predator. It led to a condition where his spine locked into a permanent erection and he could no longer scamper on all fours like his Old World cousins. As a consequence, he was constrained to thrust his legs one after the other harder and harder, but all it could afford him was a measly linear traction compared to the invaders. He was forced to improvise and discover many acts thus, referred to as long jump, steeplechase, marathon, skiing and pole vaulting in later years.

You would agree how modest yet potent this course of action is, at times referred to as the Ostrich Syndrome. It spares me the panic and the unnecessary trauma of the sight of an approaching blight. The trick, of course, lies in awakening just short of the event horizon, when one must react with a fight-or-fright, which again is a stratagem I owe to the same genealogy. And like a faithful grandson, I have invariably chosen ‘fright’. If it sounds grossly dysfunctional, please remember it helps me retain my sanity in the face of impending snafu, allowing me to retain the hard-won biped stature.

These are the times when the Venusian in our home becomes restive. All along the day, and even at the nights as we get older together, I am enjoined to get into touch with the vultures who feast on banquets such as these, and usually go under the moniker of ‘movers and packers’. The porcelain army she has commissioned must be attended to, as should be the crystal-ware of the household, much before the eventual deportation. Cellophane bags and pouches of desiccant must be pressed into service of the delicate wardrobe. Telephone, Internet and cooking gas connections must be surrendered and requisite certificates and caution moneys extracted from institutions our wards are enrolled with. I am not without my share of furrows on the forehead either. The exploding community of books must be harnessed to a predefined order before they could be boxed. The comatose appendages of photography must be consigned to designated shells. Moreover, there are searches to be undertaken for a prospective habitat in the future city. An exploration of colleges that would eventually mould the destiny of my wards is also in eminent order.

Days slither past faster than a serpent in grass and before long I am at the eve of departure without having accomplished any of the rituals. Darkness falls like a drizzle upon the city that was briefly a home and I am ushered to the last supper which is a contentious affair. I must leave by the daybreak for the bus service that will deposit me in the next city two hundred kilometres east by north, if I have to keep working for the same employer but the ostrich in me could well have been a wax figure at Madam Tussauds. A grey trolley bag is scrambled amidst much grumbling by the ace pilot of the household. An assortment of electronic gadgetry is lodged in alongside carefully counted sets of apparels the civilisation expects me to be dressed in.  It is akin to an impromptu drill and the resounding moto is not to skip anything vital, which I fail in honour of the Murphy’s Law —I forget the pouch containing my ID, driving license and ATM cards. Even if it has remained the same over a pair of decades, the fright has sunken to my bones this time, but more upon that later.

One week into the new place which was once known as the City of Lakes and I am deflated and bemused. I have registered my request for a company-owned accommodation and I happen to be the number one in the queue, but it is going to take about a month for my predecessor to clear out. I have the option to rent a house elsewhere however, so I engage a broker to zero-in on a respectable abode. In between the slivers of morning and evening and a brief lunchtime, I check out apartments, duplex and row houses on offer. I am frustrated repeatedly by a galaxy of niggardly, avaricious, and sloth-like landlords who own either overly abused or half-constructed units. Each night I return to the tiny cell of a guest house atop a flattened hillock. Just beyond the wall and dense trees of unknown variety, there is a beehive of shanties. I slide the glass of the tiny window and try to peer across. I can make out the hushed noise of life escaping those cardboard roofs under the dim light of a sodium vapour lamp. The family of crow pheasants dwelling in the trees is less discreet in their calls though. Like Du Fu, the impoverished poet, I think of my wife watching out of the moonlit window far from where I am stationed, waiting for me to return with joyous tidings.

I get disconsolate and visit the official in charge of the real estate owned by the company. Since moving the family into the guest house is not an option, I am offered a temporary shelter in an ‘unrenovated flat’. A visit to the derelict house is enough to rattle even a saint. Spiders, cockroaches and a myriad mosquito welcome me with a Zulu dance. The doors are festering with pathogenic colonies of fungi. The walls are algid with seepage and accumulated debris. Flakes of paint are falling off the ledges and ceiling in tandem with the rising stink from the soot-coated floor. Sinks and commodes seem to have become one with the gutters below. Some of this can be addressed, my purported benefactor informs me with a smirk. I expect him to turn into a bat and fly past my ears.

Meanwhile, the ‘highly rated’ college that had agreed to enlist my daughters, expresses its displeasure at their continued absence. In a fit of palsy, I agree to move into the dump, provided I am allotted a ‘proper flat’ within a week or so. Little did my family know what lay in store for them when they set foot upon this picturesque patch.  To cut a long story short, they were in and out of the dump in its slightly cleansed state within a space of ten seconds and refused to return till a battalion of janitors scrubbed, scrapped and fumigated its bemired confines to the best of their abilities. Whitewashing was out of the question, however, for reasons more than one. It was clear though I would never be forgiven for the felony.

The truck carrying our belongings arrived not long after that and we got the entire cargo dumped in the rooms where they stand mummified till date, except the set of cane chairs, deewans and the mandatory mattresses we had to unpack to continue living. The initial nights did resemble a nuclearised war zone where we battled for a toehold  against lizards, rodents and centipedes.  Many glue pads, insecticides and pressure cans later, we have seized a respectable floorspace from the enemy. Days have since stretched into weeks and weeks into fortnights but we have remained focussed at the spark at the end of the tunnel. But in a massive setback to our morale, the lords and the masters of the company-owned properties have allotted the ‘proper flat’ to someone else the moment it was vacated, overruling my right in the queue. I am sure it is a brazen disregard of rules, and it has had a multiplier effect on our suffering. Perhaps, God’s not in His heaven. All’s not right with the world.

The best we could do next morning was to take out the cane chairs on the crumbling patio and stare blankly at the surrounding shrubbery, where suddenly, my daughters squealed when they saw a snail creeping high up the wall. How lucky he is, they agreed, to be carrying his house on his back wherever he goes!